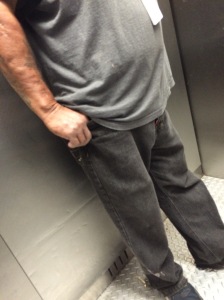 because that’s what it is. Sacred. Beautiful.

So, on Fridays I usually head down to Skid Row. It’s the worst of the worst of Los Angeles. The streets are lined with tents and people shouting at each other and shouting at no one. Drugs, alcohol, mental illness make this a landing-place for so many broken and hurting people.

But, I love it here. Oddly enough, I feel more at home working down here than I do most other places. I guess it’s because at a very dark time in my life this place saved my life.

You see, after my divorce  I wasn’t doing so well. It felt like I had lost my husband, like he had died, except he hadn’t died and I knew that because I could see him walking around with someone else. But it felt like death. My heart had died.

Can I just stop here real quick and tell you how freaking awful divorce can be.

At a time when I had a hard time putting on my clothes and getting up off the floor, this place gave me comfort. I needed a place that wasn’t so pretty. I needed a place where suffering and grief were visitors that were welcome to stay and to be heard.

And slowly, over time, I began to heal… and to breath again.

Stories shared. Life Shared. Carmelita’s son passing away. Al getting engaged. Keith preaching while washing the dishes. Fights breaking  out. I loved it all. They were my family.

So, this is Pops

I can’t give Pops name or his face but I can tell his story. “Yeah, you can write it down, but I have done a lot of unkind things to a lot of people (which is code for people are dead because of me and other want revenge), so not my face.” Yes, Pop, I understand.

My friend Kristen and I were sitting down eating our lunch with another gal  and Pops came and joined us. Pops is more quiet. He is not a loud or big. He doesn’t get in your face or shout as so many do.  He just kind of hangs out by the dish washer, but he is quick to help and makes sure us girls are doing okay.

Not sure how we got started, but one thing led to another as they often do and Pops told us how he found his way down to skid row.

You don’t end up on skid row without a story…

At age four he remembers begin so filled with anger;”My dad was an alcoholic and he beat my mom so bad. I had so much rage inside and when I finally started school I just kept hurting kids. All I knew was violence.”  He told of a time when he was nine where a kid that was bullying him came by and took his orange juice off his lunch tray and went and sat down at the table next to him. Retelling the story, he said he quietly got up and went behind the kid and grabbing him in a choke-hold with one arm, he stabbed him in the neck with a fork with the other.

I looked into the soft eyes of this quiet man and my heart sank… my heart for this little boy who knew nothing but anger and rage and abuse.

at age 57. Not in his 20s, dear sisters, not evening his 40s, but at 57 his life began to change. He got a call one day that his mother was not doing well.  His mother had a pace maker and one kidney and her body started to shut down.

He was supposed to have been given a sentence for life, but what he is convinced was a “miracle from the Lord” the DA ended up giving him a deal that made no sense. Even the judge told him, ” I am not sure what happened here, because you should have been put away, but you will back. You belong in prison.”

It was just a few months and he was released in just enough time to be with her in the hospital. His father and his two brothers- his whole family- gone (they had passed away)- but he was there. Just him and his mom.

“And I kept my word. I got clean. I when to a facility. I stayed clean for a while but I started drinking again and quickly got back on track because of my sponsor. And now I am 63, you know, and I’m walking straight and I thought to myself I want to help others. My nephew works here, so I told him that I wanted to come down and work with the guys that are in the program here. I mean, what else am I going to do?”  I love this about Pops, so simple. There is such beauty in simplicity sometimes.

“I didn’t think I needed to go through the program, but I decided to do it anyways. And, I graduated and I am an apprentice now. Dont’ get me wrong, I still get angry inside once in a while,” he reminded up, lifting his finger in the air and raising his eyebrows ever so slightly, ” but it’s different now and I tell these young guys, ‘you can do this. It is never too late to change. I tell them my story. I tell them it can be different.”

My eyes wander down to Pops arm leaning on the table in front of me, all tatted and scarred… so many scars, telling the stories of his life.

I reached over and placed my hand on his arm, Pops, you have such a powerful story. You do. Because your story could touch someone in a way my story may never do. That is your gift to others.

We sat quietly for a few minutes before the clanging and clashing in the kitchen reminded up that it was time to get ready for the next shift.

Oh dear, sisters, I have said it before and I will say it again, we are not all called to work with the homeless or to go into the unpretty places, but we are called to know they exist. To see them even if through another’s eyes. To pray for them.

May we be mindful, dear sisters.

May we not get so distracted in the busyness of Christmas and working and kids and social media that we forget to stop and see and hear those around us.

May we look for more Pops in our world that have powerful- incredibly powerful- stories to tell.

My challenge to you, dear sisters, is to stop this Christmas season. To make time to hear someone’s story. An acquaintance you don’t’ know very well. A relative that has always kept their distance. A stranger that you suddenly find yourself sharing the same space with.

Let us make time to hear.

One of the most precious gifts you can give someone this season is your time… your eyes…. your ears.